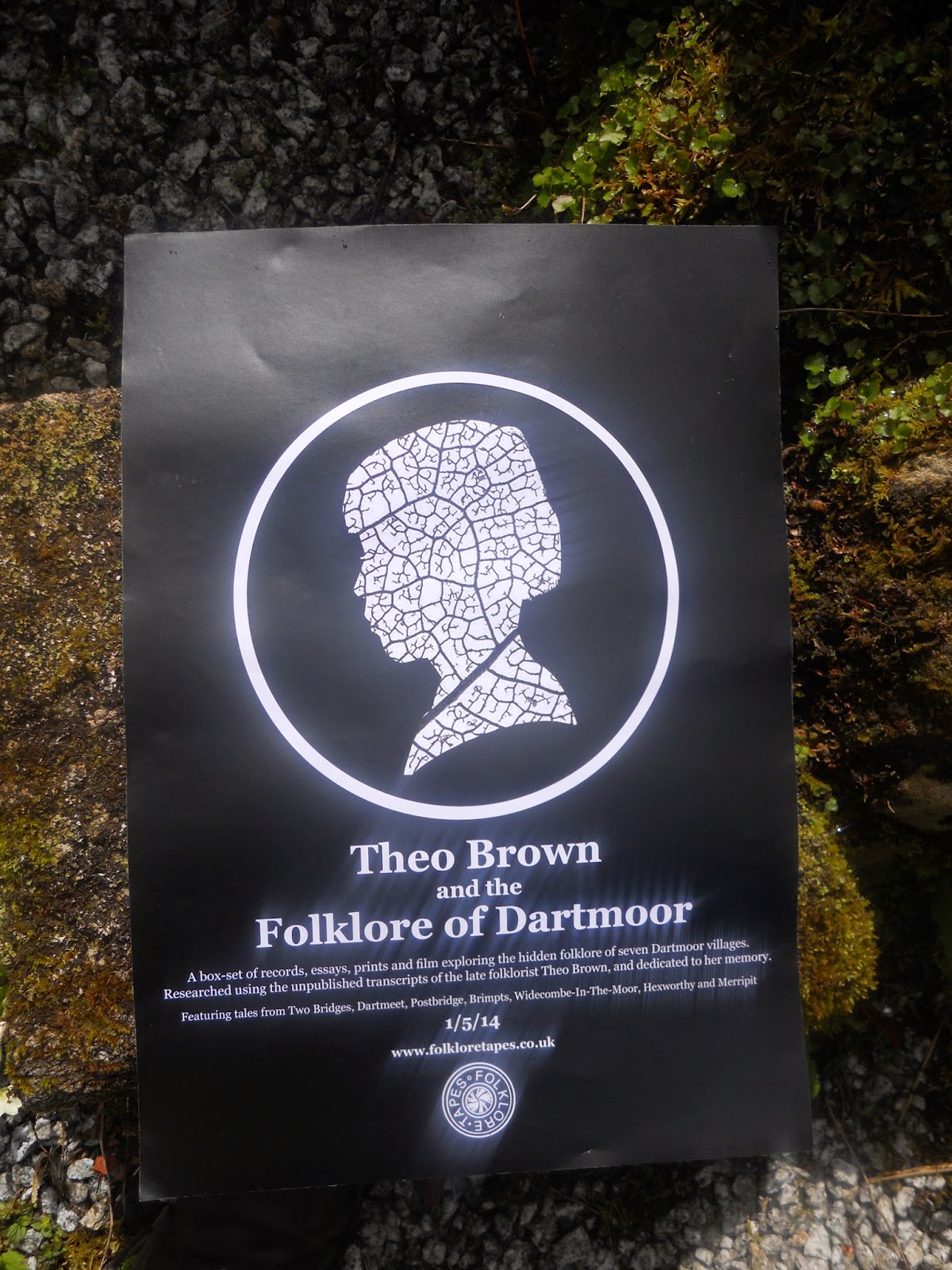 Theo Brown and the Folklore of Dartmoor explores the stories and folk-beliefs of seven Dartmoor villages through experiments in sound and vision. It also celebrates the life of the late folklorist and artist Theo Brown, whose publications, papers and woodcuts have lain dormant in the archives at Exeter University since her death in 1993. Using Brown’s unpublished research, Ian Humberstone and David Chatton Barker have crafted an audio-visual retelling of Dartmoor folklore grounded in the moor’s topography, history and folk-culture.

Theo Brown was an important and much maligned figure within twentieth-century folkloristics, who documented the arcane tales and traditions of her native Devon through first-hand accounts, often, in her younger years, camping out on the county’s waysides to do so. While her successes are the papers and monographs she authored, she was not afforded the full credit due her endeavours by the academic class of her day, who criticised her lack of formal training. Her writing is infused with a creative flair borne of her background as an artist, and the box-set is enriched by seven postcard print reproductions of her ‘lost’ woodcut images salvaged from dusty archive shelves.


Each seven-inch record takes a Dartmoor village as its theme, and each side recreates a folktale from that location as a textured soundscape, using composed music, foley work and site-specific field-recordings to conjure up long forgotten ghosts. Inspired by 1970s film soundtracks and library music, as well as the early sonic experimenters Pierre Henry and Karlheinz Stockhausen, the tracks utilise analogue recording techniques—tape loops, delays and hand-manipulations—to twist the thick organic textures into psychonautic permutations. Full transcripts of the tales covered by the records are included in the booklet, which are copied verbatim from Brown’s original notes, and intended, along with an accompanying map, as reference points to the audio.

Tactile technology and biological elements also shape the film contained on the DVD, which, in a style reminiscent of Stan Brackhage, is the product of process-led chance and spontaneity. Shot on-location on Dartmoor, the original 8mm films were caked in mould, leaves, and other organic material collected from the moor in post-development, and left to decompose before transfer. The result is an unnerving visual dreamscape, warped and manipulated by Dartmoor itself into a psychic cinematography of rich natural colours and twilit landmarks. A special edit of the music contained on the records accompanies the piece.

These materials are housed within a hand-stamped, numbered and book-cloth covered box, the size of which belies the hidden world within. The container is a psychopomp with muddy feet and mischievous saucer-eyes, waiting to lead the unsuspecting traveller through mist-shrouded lanes and out into the breadth of the wilderness, into the midst of seething, surging and clamouring stories.


Posted by Ian Humberstone at 04:07 No comments:

The Twelve Stations project started in Exeter in 2007. Originally it was intended as a one off event, featuring a one of a kind 10” record housed within a photographic book and displayed as part of a larger installation. Since then, however, the recording has taken on a life of its own, serving as the inspiration for the founding in 2011 of the Folklore Tapes.
As the title suggests, twelve train stations across the UK were visited in ten days as part of an extended field trip. At each station both a thirty second sound recording and a thirty second photograph were taken. Compositions were sketched out during each train journey, influenced in turn by the things observed and overheard whilst visiting each station. These scores were later recorded with The City Of Exeter Railway Brass Band in an evening during their weekly rehearsals.
The project was an attempt to investigate an aspect of day to day existence that is characterised by a sense of transience. It was hoped that the fleeting nature of this experience, the sad, perpetual motion of strangers passing us by, might be reflected in the twelve vignettes that make up these recordings; each piece lasts no longer than forty seconds, the sounds never fully resolving themselves, thereby hinting at unrealised possibilities.
The City of Exeter Railway Brass Band would itself become a crucial element in the unfolding of this project: both the brass band and the railway system developed as a result of the technological innovations forged during the industrial revolution. Thus, Twelve Stations was a chance to explore further this strange harmonic convergence of brass and breath, iron and steam.
Although the creation of Twelve Stations was largely as a result of chance occurences and fleeting sensory perceptions, earlier echoes may be heard in the recordings of Basil Kirchin, with his aural portraits of places and people (as well as his various library music releases), minimalist works such as Philip Glass’ score for ‘Koyaanisqatsi’ and Steve Reich’s ‘Different Trains’, and in the sense of loss that permeates William Basinki’s ‘Disintegration Loops’ and ‘The Sinking of the Titanic’ by Gavin Bryars.
The late Owen Huxham was the trombone player in The City Of Exeter Railway Brass Band when Twelve Stations was recorded. He had been with them from the very beginning, when a group of railway workers came together just after the Second World War. Most of his family has played in the band- indeed, his uncle was the original conductor. They are one of the few remaining railway brass bands in Britain and this record is a way of celebrating them as well as their long-lasting, ongoing connections with the railways.
---
Re-mastered and presented here for the first time as a seven inch record, housed in screen printed die cut sleeve with 8 page booklet and ‘train ticket’ download card in a limited run of 200 editions hand stamped and numbered by the artist.
Twelve Stations marks the first official vinyl release for the Folklore Tapes project, tracing its origins to the present day in preparation for more expansive vinyl editions soon to follow. 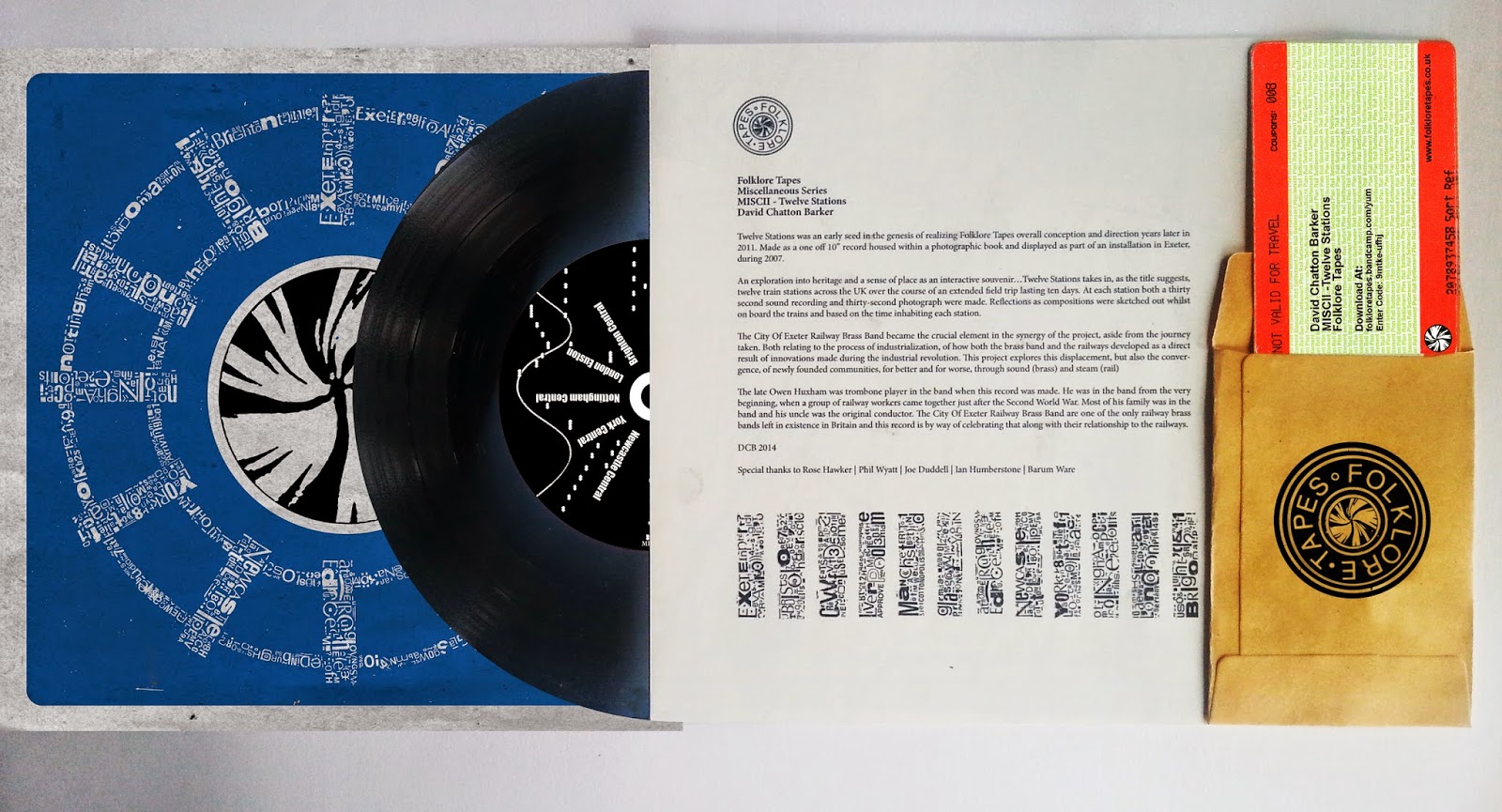