Folk Ghost by Theo Brown (Fate of the Dead)

Ghosts are of many kinds. The kind considered here is believed in and discussed by winter firesides, but there is never a first-hand account of its activities. The starting-point is always a known, strong-minded character, nearly always a person of consequence in the neighbourhood, and sometimes known to be disliked, envied or hated. Mythical elements come to be attached to his or her name. There are numerous type-motifs involved which enable us to recognize the accretions fairly easily. The variations are many...

The likliest prototype for ‘Black Hugo’ in Conan Doyle’s The Hound Of The Baskervilles was probably the seventeenth-century Richard Cabell (or Capel as i have read both names to be be his surname) of Brooke Manor, Buckfastleigh. He had the same women baiting reputation and is said to have kept his victims at Hawson Court, a mile or so to the west of his home. There are two versions of his death-scene: either he was chased across Dartmoor by ‘Whisht’ Hounds till he dropped dead, or he died in his bed and the ‘Whisht’ Hounds howled round outside the house that night. Post mortem trouble was anticipated, so he was buried very deep, outside the south porch of the Holy Trinity Church and not only an alter-tomb was erected over him, but over that a little house as well known as the sepulchre. It is square, and on the north side there is a small oak door with a large keyhole. To this day the children of the village climb the steps, run thirteen times round the little house and then dare each other to insert a finger into the keyhole and feel Cabell/Capel or the devil gnaw the tip.

The Church And Its Grounds

The Holy Trinity Church and its grounds are a as much a part to play in this story as the squire himself. The church supposedly saw the intervention of the Devil who tried in vane to stop the villagers constructing a place of holy worship. In the case of this church, Satan was foiled by the building of a steep flight of 196 steps (quite how any number of steps would prevent the devil accessing the church is confusing to me)
In the nineteenth century the graveyard was a frequent target for grave robbers, its secluded location and a convenient lane made it the ideal spot.
On Tuesday the 8th of May 1849 arsonists broke into the church and started a fire which destroyed the vestry, part of the roof of the north aisle, the parish chest and badly damaged the communion table.
For hundred of years it was thought that black magic rites had been carried out at the church and the Squire’s tomb in particular. The building which houses the tomb has a solid wooden door at the back, this had been placed there to deter Satanists from gaining entry.
Below the church are a system of caves which run for about 3.5km. In ‘Reeds Cave’ is a  weird natural formation known as the ‘little man’, this has been formed by the joining of a stalactite and a stalagmite. The figure is said to resemble a human figure in seventeenth century clothes. This formation has been calculated to lie directly the tomb of Cabell/Capel.

Posted by http://folkloretapes.bandcamp.com/ at 11:51 No comments: 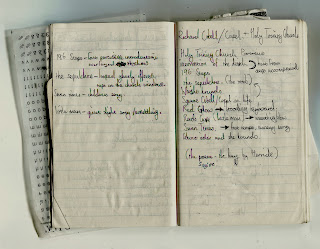 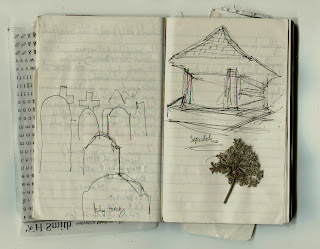 Posted by http://folkloretapes.bandcamp.com/ at 16:36 No comments:

Email ThisBlogThis!Share to TwitterShare to FacebookShare to Pinterest
Labels: notebooks

The long awaited follow up to DFT Vol.I is close to completion with David Orphan and Anworth Kirk taking up the role of researchers.

The area of investigation for volume two is ghosts and hauntings.

The Holy Trinity Church its Grounds and Squire Richard Cabell is the focus of David Orphan.

Jay's Grave is the foucs of Anworth Kirk.

Here is a piece entitled 'The Sepulchre' to give an insight into whats waiting round the corner.